What would happen if we stopped trying to burn it, and simply let Coast Tea-Tree senescence and fall over?

It’s been a busy five years since I completed my honours research down at Wilsons Promontory looking at plant community dynamics following Leptospermum laevigatum (Coast Tea-Tree) invasion and senescence. The ‘big wet’ has rolled in; most of ‘The Prom’ has been burnt; and a new ‘when and how’ to burn management approach has actually resulted in some successful removal of Leptospermum from the Yanakie Isthmus. However, most of the isthmus is still heavily encroached by the native invader and Leptospermum continues to be a problem species in many coastal areas.

We all know that when shrub species encroach previously grassy ecosystems your left with a ‘species-poor scrub’… right? And that the only way the community will recover is through intensive management intervention … right?

So it was observed that the isthmus had been invaded for such a long time that areas of Leptospermum had begun to senesce and fall over, creating tree-fall gaps in an otherwise densely invaded landscape. We undertook a project to document how the plant community was responding to these changes in Leptospermum dominance – the details of which have been published in Applied Vegetation Science and Ecological Management and Restoration this year (read them HERE and HERE).

So the first myth that we dispel in the paper is that, Leptospermum invasion creates a ‘species-poor-scrub’. We compared uninvaded, recently invaded and long invaded sites and found no difference in species density across multiple scales of observations. Surprisingly, even at the scale of 1m2, long invaded stands contained on average 13.6 (±1.3 SE) species. By no means a ‘species-poor’ quadrat by anyone’s standard.

The invasion of Leptospermum is not without impact however, as we observed a significant shift is species composition between invasion states. Long invaded sites contained many common and exotic forb species, and the visually lower biomass within these dense stands, compared to uninvaded areas, probably led to past perceptions of severe negative impact. And of course, we cannot look past the significant structural impacts: 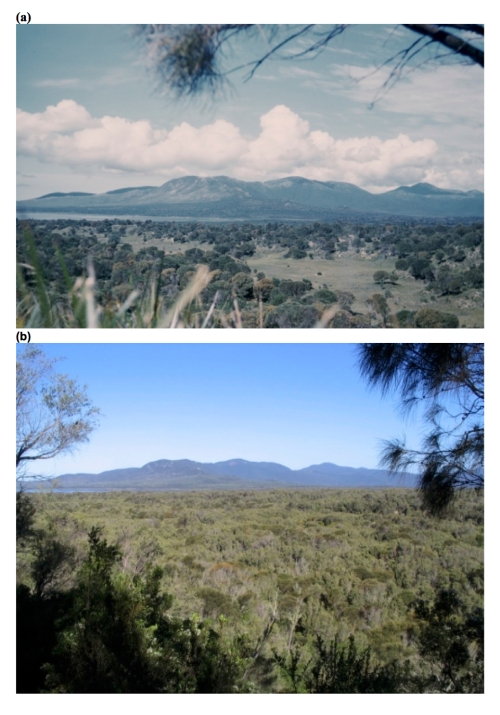 . Paired photographs taken on the Yanakie Isthmus, Wilsons Promontory National Park. (a) Photo taken circa 1960 and displays a grass dominated swale with sparse Banksia integrifolia overstorey. (b) Photo taken in 2008 and shows the uniform dominance of Leptospermum laevigatum. Photos courtesy of Jim Whelan.

We observed a spatially dependent positive effect of Leptospermum senescence on species density. That is, only when a sufficiently large area had been surveyed do you start to count significantly more species per unit area than in long invaded stands. Only at that scale was the full variety of niche space sampled and therefore the true diversity of these tree-fall gaps observed. It was likely that the increased light and soil nutrients associated with the removal of Leptospermum dominance promoted the establishment of more species.

Plant community composition remained dissimilar within tree-fall gaps. Relatively young gaps supported a floristic assemblage not dissimilar to gaps of other ages suggesting species present in gaps at any time will be recruited early. We also observed floristic composition in old gaps was most dissimilar to long invaded stands (so what it’s composition would have been like prior to senescence) and more similar to an uninvaded stand. Most importantly, Leptospermum was not re-establishing dominance by recruiting back into these gaps! 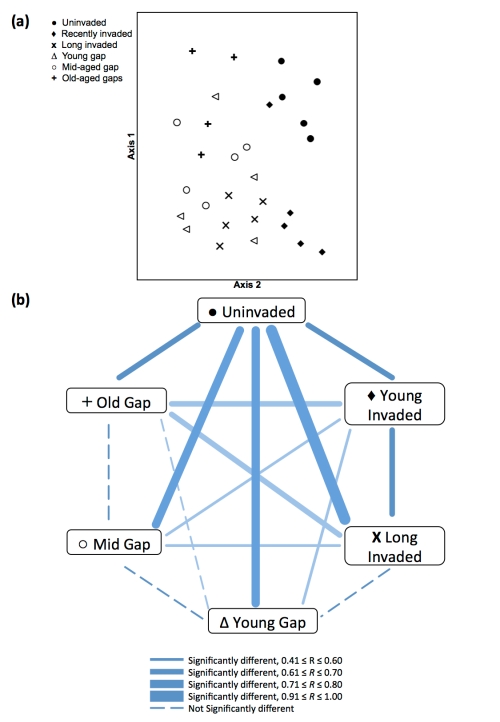 (a) NMDS ordination of plant species composition in invasion states using abundance data, at the scale of 64 m2. Two-dimensional stress = 0.16. (b) Pairwise floristic differentiation of the invasion states, as measured by the ANOSIM R statistic.

We conducted a seed bank germination study of soil from under dense Leptospermum stands and found the native seed bank was both impoverished and sparse. We did however see greater representation of native species when the effects of a fire were simulated (heat and smoke treatment of the soil) which was achieved by inhibiting the germination of common exotic species rather than the promotion of other natives. Therefore, recovery by much of the original flora after site occupation by Leptospermum may be contingent on mechanisms other than soil stored seeds.

From a management perspective, this research provides an initial insight into what would happen if a ‘do-nothing’ management approach was employed. It is true that in the absence of fire, these gaps could have a positive influence by acting as refuges for some species and as sites of high species density. However, this ‘do-nothing’ approach will not lead to system recovery. These gaps are only very small islands within an otherwise uniform landscape; gaps remain compositionally different to uninvaded stands; and recovery from the seed bank will be dominated by exotic forbs. Regardless, it is unlikely that the isthmus will remain free of fire for a sufficiently long period of time to allow very large stands of Leptospermum to senesce.

This research highlights the importance of considering shrub invasions beyond dominance and to start questioning how permanent are these perceived impacts.

I invite anyone interested by this blog and wishing for more detail to read the peer-reviewed papers that can be found HERE and HERE. Alternatively, send me an email and I’d be more than happy to send you a PDF.

This entry was posted in Uncategorized. Bookmark the permalink.

6 responses to “What would happen if we stopped trying to burn it, and simply let Coast Tea-Tree senescence and fall over?”